Some surprises are nice.

Since the beginning of March, when we had 29 sheep, numbers have increased.

2 ewes, a young ram and a lamb came in. This gave us a total of 7 lambs. The biggest crop of lambs in quite a few years.

About the 20th of March a single ewe with a lamb arrived. They were very skittish and took several days to adjust to the people. With 8 lambs and a total of at least 35 sheep, no losses to roads or predators since early December, we feel that it’s a good start to the new year.

The only bad news is that a mature ewe was seen near the domestic sheep at Stag Leap ranch.

Disease transfer from domestic sheep is an ever present danger and has been responsible for the loss of up to 80 % of some other lower BC herds in the last year.

The sheep will be moving away to summer pastures very soon and new lambs will be born starting the middle of May.

Have a nice summer, 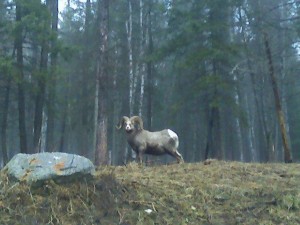 Sheep feeding started Dec. 21st with 16 sheep at the feeders. We supplied timothy hay with red-white clover, a salt block with sulfur and loose salt with mineral.

There was a rumor that 2 sheep had been hit on the highway earlier in December which is unconfirmed.

There were also 3 white tails spotted, a doe and two fawns.

Sheep feeding has gone well this year. Feeding started the middle of December and will end in April when the sheep leave for the summer ranges. There were a maximum of 32 sheep at the feeders with 6 lambs to help increase the herd. Timothy and clover hay was provided by Charly Moon of Creston. It attracted the sheep like a magnet and attested that it was of high quality. Thank you Charly.

We will be looking at ways to keep the sheep off of the highway on their summer range. The problem is the need for salt and mineral. 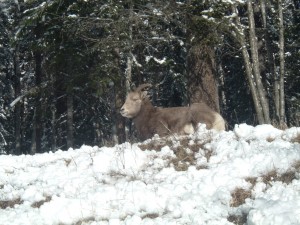 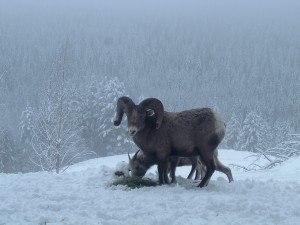 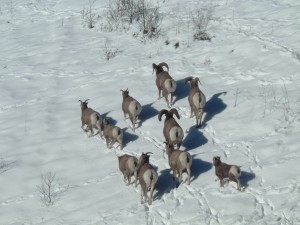 To get started I’ll wish the sheep a good lambing. 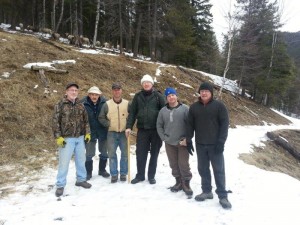 It  was a late spring with lots

of high country snow that left

them scrounging for grass

before the alpine forbs were

available. If you hike onto

the mountain side below

possible to see ewes and

We will start feeding again in early December. 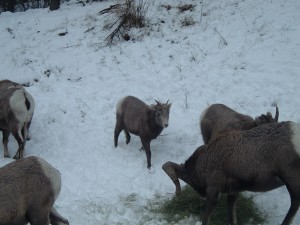